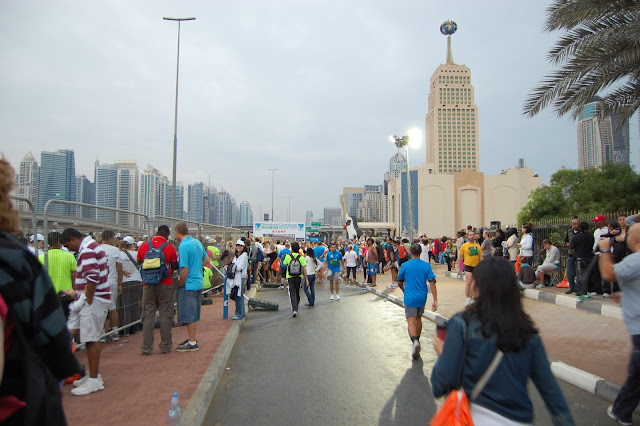 The start of the Dubai Marathon and 10k race.
Got up really early this morning to go to the Dubai Marathon. Andy had signed up to run the 10k race and Steve Allie Nina and Kristin had signed up for the 3k Fun Run. I sort of missed the deadline and didn't want to sign up for anything so I just went to support them. We got there and Andy was in a huge mass of people waiting to start the 10k. They all started running. I watched them for about 15 seconds and decided the race looked fun. I handed Allie and Steve my jacket and my bag and said, "Uhh, I'll be back later. I think I'm going to go run this." Lucky for me I had my running shoes on. I hopped in with the group and ran the whole 10k!! It was great. Early on I found this middle age man that was running the same pace as me. We stuck together the whole race. Turns out his name is Rob (or Rod, not sure) he's from Australia. Really nice guy. 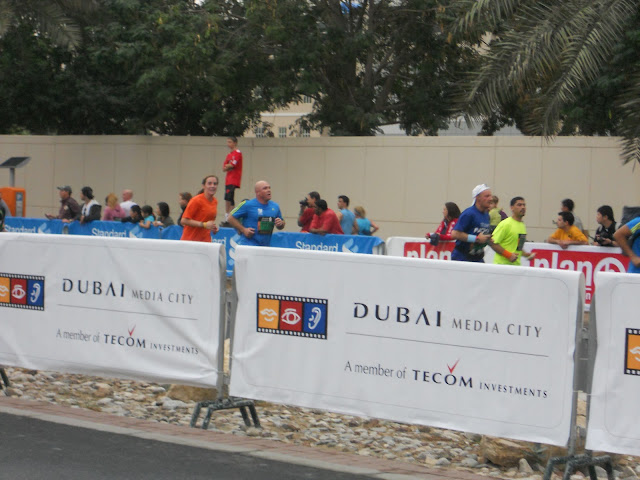 Me and Australian Rob finishing up the 10k race.
At the end of the race I could see the RIT Dubai gang yelling at me to sprint into the finish. I ran faster but it wasn't exactly a sprint. Finished the 10k in a little over an hour. It was such a great feeling. At the end they even gave me a participation medal (even though I wasn't registered!!<--I guess they figure usually people won't try to ghost run the 10k.) 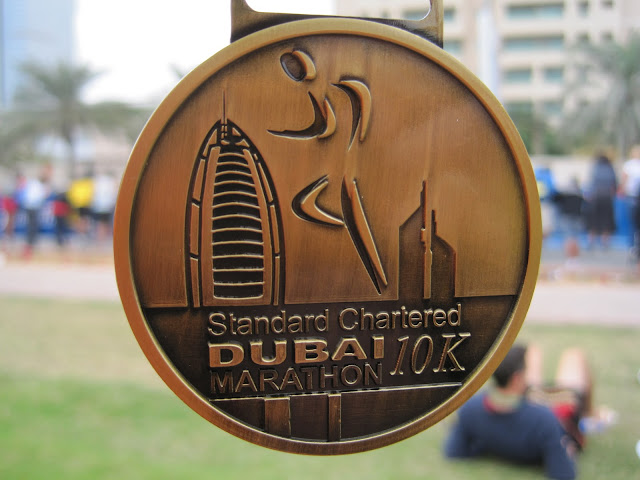 The medal from the Dubai Marathon 10k race. One of my favorite souveneirs from the whole Dubai trip. 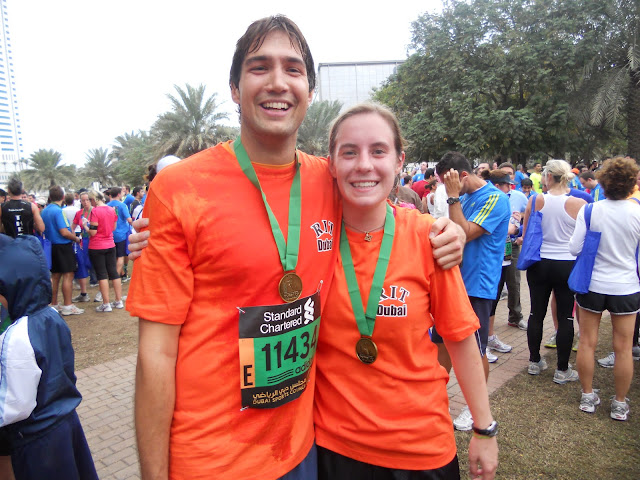 I said bye to Australian Rob and went to find the RIT Dubai gang. We hung out and watched the full marathon runners come into the finish. The winner finished in 2 hours and 7 minutes or something. Insanely fast. He was from Kenya. His country was cheering so loud and waving flags when he finished. It was quite the atmosphere. 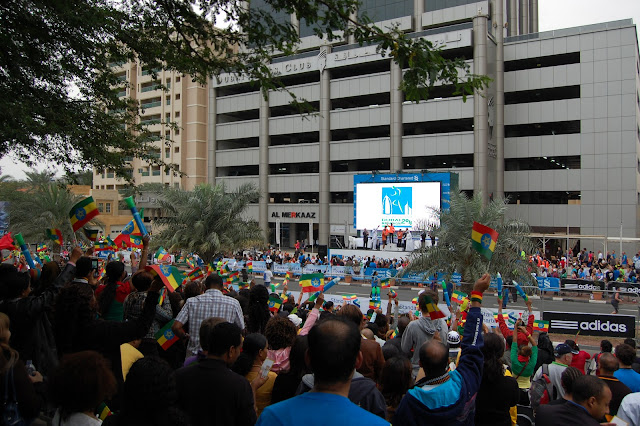 All the Kenyans cheering when the winner finished.
Andy and I held everyone else's stuff while they went to line up for the 3k Fun Run. We staked out a spot on the side of the course and waited for them to come by. We got some pictures as they went by the first time and then sprinted down towards the finish to catch them again. One of the first ones to finish was this little boy that looked like he was about 8 years old. Turns out we were standing next to his parents. He's 11, he loves running, and he can run a 5k in 20 minutes. Impressive. So he finished before anyone in our gang, kind of funny. 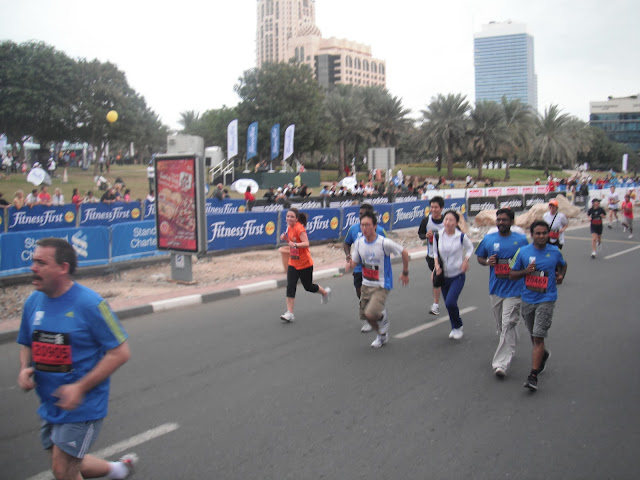 Allie finishing up the 3k race!!
After the 3k Fun Run ended we all headed to the events set up at the end of the race. There were dance preformances, free give aways, companies handing out beverages, free head bands, small booths with stuff for sale, and even a drum circle. Quite the post marathon party I'd say. 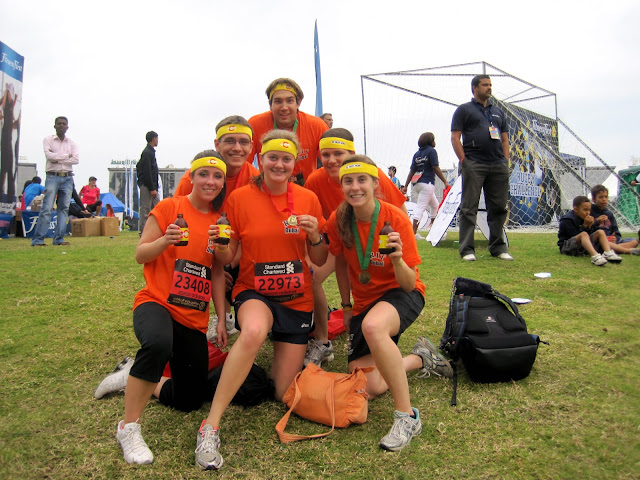 All of us in our free Vitien C headbands holding our free Vitien C drinks. Vitien C is this weird energy drink a ton of people drink at RIT Dubai. We were just like a walking product advertisement. A guy from Vitien C asked for our picture and then another guy got a picture of us when we were all holding the free Lipton Iced Teas. So funny. 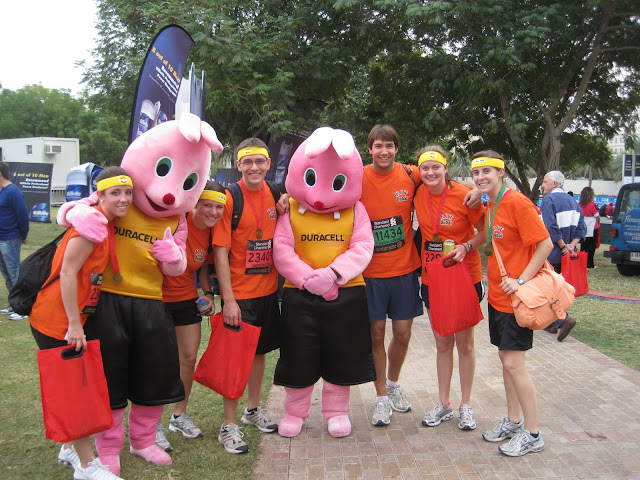 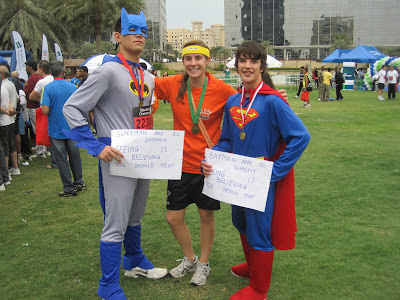 Some funny guys dressed up at the Marathon.
Afterwards we headed to a restaurant called On The Border for lunch. Great mexican food. We were all starving. Right when we headed outside after lunch it started to rain, IN THE DESERT. Perfect timing though because all we had to do was catch a cab back to Etisalat. I really enjoyed running that 10k race. Overall we had a ton of fun today.